AEROBOAT WILL MAKE A BOAT LOVER OUT OF YOU!

Set to be unveiled at the Salute to Style show in July at The Hurlingham Club in London, the Aeroboat is a motor yacht that seems to blend retro and furutistic lines in equal measure that would make Jules Verne proud without going Steampunk. Inspired by the Spitfire fighter plane, the Aeroboat packs aircraft-inspired switchgear and shock-mounted seats into a long, sleek form. But what really has our interests piqued is what lies beneath the stylish decks.

Each of the dozen Aeroboats to be built will pack a reconditioned, marinized, fuel-injected Rolls-Royce Merlin V12 engine – the same 27-liter powerplant that propelled the Spitfire. With 1,100 horsepower on tap, it’s expected to propel the Aeroboat up to a top speed between 75 and 95 knots, or 86-109 miles per hour by landlubber standards, which is pretty damn fast on the open water.

– The Aeroboat: a blend of high technology, British engineering and glorious history
– A scale model of this sophisticated, sleek powerboat will be displayed alongside an original Merlin V12 engine
– Salute to Style: a celebration of speed on water, air and road

A unique mixture of historic British engineering and cutting-edge design is to be displayed at summer garden party Salute to Style at The Hurlingham Club on 16-19 July: yacht design studio Claydon Reeves is showing their newly-produced model of the Aeroboat alongside the Rolls-Royce Merlin V12 engine destined to power the craft.

A stylish and entirely British project, every single one of the 12 Aeroboat super-yachts destined for production will be powered by a reconditioned, fuel-injected Rolls-Royce Merlin V12 engine, with documented provenance, detuned to 1,100hp and giving a potential speed range of 75-95kts.

Inspired by the sleek lines of the famous Spitfire fighter, from the stern and sweeping tail echoing the wing’s trailing edge to the authentic air intake scoop, the Aeroboat’s throttle and switchgear design is aircraft-inspired and the shock-mounted forward seats are a nod to the Spitfire’s own landing gear.

Like many of the unique classic cars and historic racers displayed during bijoux event Salute to Style at The Hurlingham Club, the Aeroboat is built to customer specifications: behind its retro style influence, the boat is a contemporary, high-tech beautiful creation in carbon fibre, Kevlar and lightweight wood veneer, all British-sourced. Every element of its interior design, from the cockpit to the trim, engine specifications and exterior finishes, can be configured to suit its owner.

At Salute to Style, the Aeroboat and the Merlin V12 engine join a range of prestigious automotive machinery, from Mille Miglia and Le Mans racers to prime examples of worldwide craftsmanship in motoring history, in an elegant celebration of speed on water, air and road. 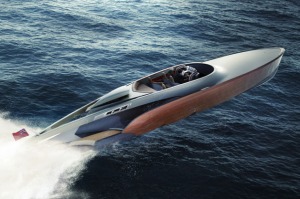