Want To Learn How To Sail? 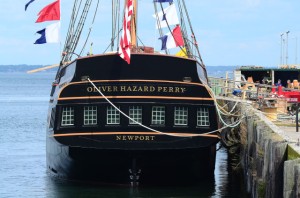 Although it is still cold and wintry in most places in the US, plans for the summer for kids abound with opportunity. The Oliver Hazard Perry is taking on Crew Members! Although this is for school age children I believe as parents we can share this unique experience with kids and let them enjoy a tradition that has been around since recorded time. Sailing is such a unique experience it should be shared with our younger generation.

It doesn’t feel very much like summer right now, but at least we are on the far side of the winter solstice, so each day brings spring a bit closer. And this spring the Oliver Hazard Perry the first ocean-going full-rigged ship to be built in America in over a century will begin sailing. The OHPRI organization has announced summer camp programs on the new sailing school ship.

From their press release:
Teens from around the country and the world will board in July and August for thrilling one- and two-week Education at Sea camps. The 200-foot Sailing School Vessel (SSV) Oliver Hazard Perry, hailing from Newport, R.I., has a 500-ton steel hull and a 130-foot tall rig with square sails on all three masts. She will have a captain, officers, a cook, an engineer and a dozen other professional crew members, but the balance of her crew will be none other than the students themselves – after all, she is a Sailing School Vessel.
Registration for camp is now open to the public. The seven weeks of camp will take place this summer, allowing teens to become part of the exciting and highly-structured environment of a sailing ship. (For the remainder of the year, SSV Oliver Hazard Perry will serve as the platform for programs with schools, universities, scientists, and other partners.)
“They’ll learn to haul lines, hoist yards, climb the rigging, tie knots, keep lookout, and even steer at the helm, along with other seamanship skills,” says Captain Richard Bailey, who has been commanding Tall Ships and working with youth aboard them for decades, “but most important, they’ll learn to be good shipmates, and good citizens of their greater world.”
Camp Details: Tentative schedule and itinerary (subject to change):
1. July 5 – July 18, 2015
Middle School 2-week Program
Newport, RI – Portland, ME
Ages: 12-15 years (Middle School)
2. July 26 – August 1, 2015
High School 1-week Program: Almost 50% full!
Boston, MA – Newport, RI
Ages: 15-18 years (High School)
3. August 2 – 15, 2015
High School 2-week Program
Newport, RI – Boston, MA
Ages: 15-18 years (High School)
4. August 16 – 22, 2015
Middle School 1-week Program
Boston, MA – Newport, RI
Ages: 12-15 years (Middle School)
Registration is on a first-come, first-serve basis. All camp programs sold out in 2014, so don’t delay your registration for 2015, sign up today!
Students board at 4pm (1600) on the first day of program and disembark at 9am (0900) on the last day of program. Camp price is $1,600 for one week and $3,000 for two weeks, which includes tuition and all meals.

I own a ship model web store and love old wooden ship models. I have been selling quality model airplanes and ship models for years and enjoy building them. My house looks like a hobby shop!
View all posts by shipmodelsuperstore →
This entry was posted in ship models and tagged Oliver Hazard Perry, sailboat, sailing, wood model ships, wood ship models. Bookmark the permalink.